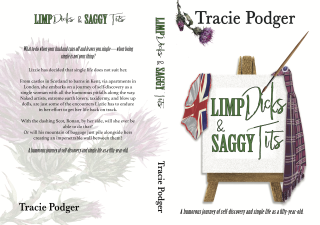 What to do when your husband runs off and leaves you single—when being single is not your thing?

Lizzie has decided that single life does not suit her.
From castles in Scotland to barns in Kent, via apartments in London, she embarks on a journey of self-discovery as a single woman with all the humorous pitfalls along the way.
Naked artists, extreme earth lovers, taxidermy, and blow up dolls, are just some of the encounters Lizzie has to endure in her effort to get her life back on track.
With the dashing Scot, Ronan, by her side, will she ever be able to do that?
Or will his mountain of baggage just pile alongside hers creating an impenetrable wall between them?
A humorous journey of self-discovery and single life as a fifty-year-old. 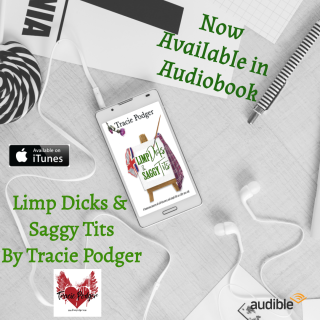 Limp Dicks & Saggy Tits Excerpt
Copyright 2019 TJ Podger
Fifty and single was not a great place to be. Especially when I had no desire to be either. But, against my wishes, I found myself to be exactly at that point.
Why should meeting a man be so difficult at my age? Why couldn’t I walk into a bar and not look like a cougar on the prowl or a nearly-OAP being patronised by the youth? Why couldn’t I still have a healthy sex life even if I didn’t have a husband anymore?
Too many whys, and after my third glass of wine, I guessed I could continue to add more but…what the fuck good would it do?
“Lizzie, are you listening to me?” I heard.
“No,” I replied, draining the glass I held in my hand. “I’m thinking about what the nurse said to me.”
“What did the nurse say?”
“That I might need to consider lubricant.” I was aware of the slur to my voice. “She said I have vaginal atrophy. Fucking vaginal–”
“What’s vaginal atrophy?” he asked, interrupting.
“A shrinking fanny, Joe!” I replied.
“Let’s just call it a return to virgin fanny, it sounds better. So, did you hear what I said earlier?”
I was lying on the sofa. There was a romcom playing on the TV that I had absolutely no interest in—had probably seen twenty years ago—while my best friend, Joe, was sitting in the chair opposite me.
“No, what did you say?” I asked, shuffling up a little so I at least looked interested in what he had to offer.
“I said, I think we need a little weekend break away,” Joe repeated.
“I like the sound of that.”
“I might have a look online tomorrow.”
Maybe he told me more, I had no idea. I awoke the following morning with a banging headache and a mouth tasting like a sewer.
“Who filled their mouth with sewer…stuff, to even come up with that phrase?” I said aloud as I climbed from the sofa in need of water.
The kitchen was spotless, and I gave an imaginary thumbs up to Joe who had obviously cleared away our takeout containers. I smiled at the small box of empty wine bottles he’d left on the counter, ready for recycling.
I scratched my head, feeling the tangles in my hair from sleeping on a sofa at a strange angle, and probably tossing and turning at that. On sniffing my armpit, I tried to decide on the urgency of a shower, or whether I could fit a cup of coffee in first. However, since I was alone, it didn’t matter if there was a slight sweaty smell; coffee was needed.
The only time I drank instant coffee, from the jar, was when I was hung-over. I hated the stuff normally, but I couldn’t be arsed to make fresh. I unscrewed a jar, banged it on the counter to loosen up the granules, and plunged in a teaspoon. Once deposited in a mug, boiled water added, and a splash of milk, I piled in some sugar and sipped. On hung-over mornings it was nectar for the brain.
Flashes of conversations filled my mind as I walked through to the bathroom. I was sure Joe mentioned a weekend break at some point the previous evening. I hoped it involved a spa, and wine, and maybe a nice restaurant, and a bar, and maybe more wine.
My singleton life since…him, revolved around too much alcohol, and not enough self-love, of any kind so yes, a nice spa would be perfect. It was time to kick myself and my alcohol-fuelled body back into shape. I was that buoyed in that precise moment, I showered quickly, drank down the rest of the coffee, and then had the bright idea to hit the gym, a place I hadn’t ventured to in months.
I pulled on some leggings and accompanied them with a long t-shirt to hide the rolls of fat. I found my trainers and a gym bag with a towel and toiletries and before I could change my mind—or sanity returned—I left the flat and walked up the road.
I’d made it halfway before my body started to sway and a small wave of nausea washed over me. I could have very easily turned around and headed back home. I was determined, however. I was going to the gym; I was sick of myself, and I was sure everyone else was too.
Many a time I’d made the decision that I didn’t want/need a man in my life and every time, I knew I was kidding myself. I also knew it was the fallout from being cheated on and left to pick up the pieces while he swanned around town with a bloody drag queen.
Maybe if she’d been tall, blonde, slim and well spoken with a high profile job in the city I might not have been so bitter. If she had been the typical just-out-of–her-teens bimbo with no aspirations other than wanting a sugar daddy, I could have understood, sort of. But a drag queen? Now, I have nothing against drag queens, per se. I have everything against my husband running off with one.
I had no idea why the situation seemed worse, I mean, it was pretty laughable. He was short, balding, with a paunch forming, and heading for his sixties. ‘She’ was over six feet in height and that was without the five-inch heels, muscles, tattoos down one arm from days in the navy, of disputable age, and with one false eye! I mean, for fuck’s sake, why? 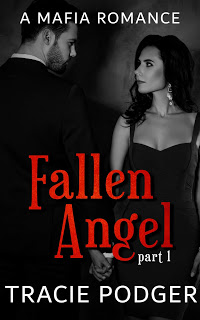 On the first day of her holiday to Washington, DC, Brooke Stiles meets Robert Stone.

Dark eyed, damaged and dangerous – Stone has never had a normal relationship for fear of his past being exposed. Not knowing how to respect nor love, he struggles with his feelings for a woman who makes him question everything that he is.

Brooke falls in love with him and as their relationship grows she learns who he really is.  Her future is set. She is to heal her man and mend his broken soul. But can she do the one thing that he asks?

This is a story of an ordinary woman who falls in love with an extraordinary man and has to discover whether she is strong enough to forgive him his past.

The Fallen Angel series is a six book series with a further six books to accompany it. You can find the first six books here: 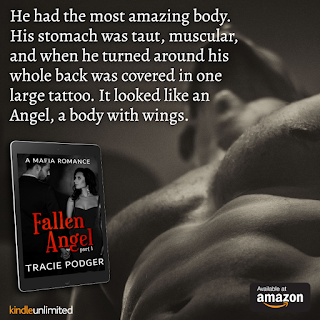 It was in a small room in an office block in Washington, DC, that my life changed, forever.
Sam, my best friend, was sitting at his desk, occupied by a call. Whilst waiting, I headed to the kitchen; some coffee was needed to get me over the jet lag I was feeling.
It was the oddest thing; I simply felt someone behind me, and my heart quickened in fear. There had been no sound, no footsteps, or the noise of the door opening. My hands gripped the counter before I slowly turned around. I found myself looking into the darkest eyes I had ever seen, the blackness took my breath away. It took all my strength to draw my eyes away to look at his face and then he smiled, unblinking at me. He was so close, I could feel his breath, and I couldn’t move, I couldn’t breathe.
He was tall, over six feet and powerfully built. His shoulders were well defined in his suit. His black hair was cropped short at the sides, slightly longer and spiked on top. He had a little stubble around a strong jawline and a slight crook to his nose. If anyone could be described as perfect, it was that man.
I guessed him to be in his thirties with just the right amount of laughter lines around his eyes to soften the intensity of him, slightly. As he looked at me, his eyes seemed to grow darker. I felt a heat creep up my neck and my stomach knotted. The air around me felt charged and sparked with electricity, and yet he did not say one word.
“There you are,” I heard. “I’ve been looking for you, are you ready to go?”
I looked over to Sam and found my mouth so dry I couldn’t speak, so just nodded. He slowly turned to Sam.
“Oh, good evening, Mr. Stone. I didn’t realise you were working late,” Sam stammered.
“Always, Sam. Now, introduce me to your friend,” he replied, his voice was low and commanding.
“Brooke, this is Mr. Stone, owner of Vassago. Mr. Stone, my friend from England, Brooke Stiles. She arrived this morning, to stay with me.”
Mr. Stone turned back to me, a slow smile crept across his face, and he held his hand out. I took it and as his hand closed around mine, images flooded my brain, too fast to be able to see any one of them, but it unnerved me greatly.
“Pleased to meet you, Miss Stiles. I look forward to seeing more of you,” he said, as his dark eyes bored straight through me.

Tracie Podger currently lives in Kent, UK with her husband and a rather obnoxious cat called George. She’s a Padi Scuba Diving Instructor with a passion for writing. Tracie has been fortunate to have dived some of the wonderful oceans of the world where she can indulge in another hobby, underwater photography. She likes getting up close and personal with sharks.

Come on over to Tracie’s reader’s group to keep up to date on news:

What to do when your husband runs off and leaves you single—when being single is not your thing?

Lizzie has decided that single life does not suit her.

From castles in Scotland to barns in Kent, via apartments in London, she embarks on a journey of self-discovery as a single woman with all the humorous pitfalls along the way.

Naked artists, extreme earth lovers, taxidermy, and blow up dolls, are just some of the encounters Lizzie has to endure in her effort to get her life back on track.

With the dashing Scot, Ronan, by her side, will she ever be able to do that?

Or will his mountain of baggage just pile alongside hers creating an impenetrable wall between them?

Tracie Podger currently lives in Kent, UK with her husband and a rather obnoxious cat called George. She’s a Padi Scuba Diving Instructor with a passion for writing. Tracie has been fortunate to have dived some of the wonderful oceans of the world where she can indulge in another hobby, underwater photography. She likes getting up close and personal with sharks.

Come on over to Tracie’s reader’s group to keep up to date on news: